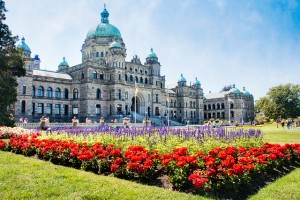 British Columbia is full of treasures for travelers to take in, not the least of which is the city of Victoria. Victoria is the biggest city on Vancouver Island. It is the seat of British influence on Canada, complete with large, British style parliament buildings honoring the monarchy. There is a great deal of history, beauty and other points of interest to take in when visiting Victoria.

One of the most well known features of Victoria are its gardens. Victoria is known for its ideal growing conditions and temperate climate. The city is decorated with numerous gardens through out, some large and some moderate in size. The gardens and grounds outside the parliament building are perfectly maintained and include an impressive variety of flowers. The parks in the city also make for impressive garden landscapes with a variety of foliage growing along paths and waterways. But no gardens are more well known in Victoria than the Butchart Gardens. The professionally maintained Butchart Gardens are some of the most visited gardens in North America. The property is enormous and is home to numerous separate gardens, each with their own theme and plant species.

Another popular attraction in Victoria is the parliament building itself, which offers features such as a royal tea time in a proper British tea parlor and numerous exhibits. The grounds are also immaculately kept, with fountains and foliage displays around the entire structure.

Victoria is located on a large Pacific island, so sea faring excursions are another huge selling point of coming to the area. Orca whales migrate just off the island, and whale watching tours are extremely popular. There is a wide variety of marine life to see off Victoria’s coast. Victoria is also home to exquisite private harbors and large communities of boating residents. Anyone considering a vacation who wants to surround themselves in elegance and natural beauty should find their way to Victoria, British Columbia.